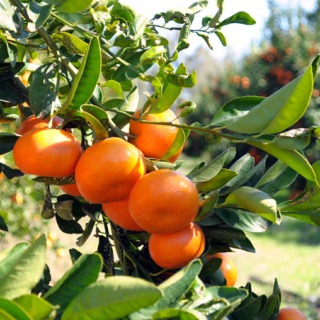 In 1982, the inventor observed a variety of Mandarin among 18 year old 'Murcott' trees planted in 1964 in a nucellar selection program plot in INRA experiment station near Afourer town.

In 1985, the young trees bore fruit of the same characteristics as those produced by the original tree, namely, fruit with a superior rind color which was orange red as distinguished from the yellowish orange of the 'Murcott' fruit.

In the spring of 1988, the inventor observed five-year old trees of 'Inra W' planted under the 'Murcott Sasma' name on a farm belonging to the Domaines Agricoles Company in Rabat.

Those trees were renamed 'Afourer' and the inventor noticed that while some yellowish green fruits of these trees, which resulted from out of season blooming, were seedless, the red orange fruits were very seedy.